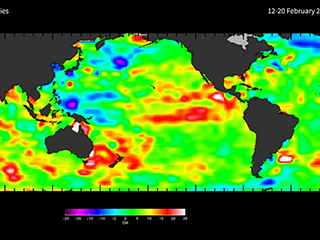 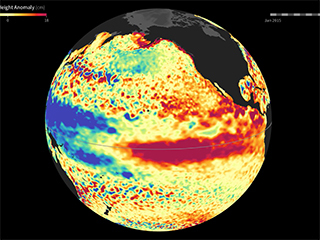 While El Niño events have a significant impact on the entire Earth System, they are most easily visible in measurements of sea surface temperature (SST), sea surface height (SSH) and ocean winds near the surface. In fact, the precursor and the main driver of El Niño events is manifested in the weakening of the normally westward blowing trade winds, or even their complete reversal to blow from west to east, in the Western and Central tropical Pacific.

These images show ocean winds near the surface as observed by NASA's ISS-RapidScat on the International Space Station. The monthly average November 2015 anomalous winds (with respect to 2014) are shown. The colors represent the wind speed differences, while the vectors illustrate the direction of the anomaly mean wind components. The El Niño signal is very clearly evident in the eastward blowing anomalous winds observed in the tropical western and central Pacific. The El Niño signal is also seen in the anomalous stronger convergence into the tropical eastern Pacific, as evidenced by the stronger winds moving toward the equator observed in this region.