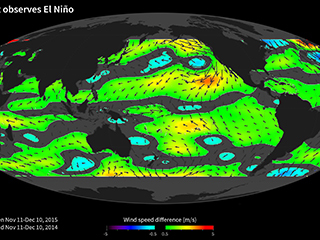 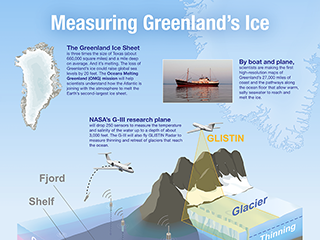 El Niño is characterized by unusually warm ocean temperatures in the eastern equatorial Pacific. The warmer water associated with El Niño displaces colder water in the upper layer of the ocean causing an increase in sea surface height because of thermal expansion.

This visualization, created using a sea surface height anomaly product produced by AVISO, shows sea surface height anomalies (SSHA) from January 1, 2015 to January 22, 2016. The maps have been processed to highlight the interannual signal of SSH, i.e., the mean signal, seasonal signal, and the trend have been removed. Red and white shades indicate high sea surface heights relative to the reference state, while blue and purple shades indicate sea surface heights lower than the reference state. Neutral conditions appear green. After five consecutive months with sea surface temperatures 0.5 degrees Celsius above the long-term mean, NOAA issued an El Niño Advisory to declare the arrival of the phenomenon. A statement issued by the NOAA Climate Prediction Center on March 10, 2016, states that "A transition to ENSO-neutral is likely during late Northern Hemisphere spring or early summer 2016, with close to a 50 percent chance for La Niña conditions to develop by the fall.”