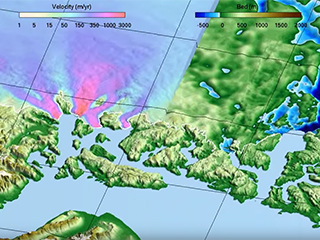 Greenland looks like a big pile of snow seen from space using a regular camera. But satellite radar interferometry helps us detect the motion of ice beneath the snow. Ice starts flowing from the flanks of topographic divides in the interior of the island, and increases in speed toward the coastline where it is channelized along a set of narrow, powerful outlet glaciers. In the east, these glaciers make their sinuous way through complex terrain at low speed. They form long floating extensions that deform slowly in the cold north. As we move toward sectors of higher snowfall in the northwest and centre west, ice flow speeds increase by nearly a factor 10, with many, smaller glaciers flowing straight down to the coastline at several kilometers per year. This complete description of ice motion was only made possible from the coordinated effort of four space agencies: the Japanese Space Agency, the Canadian Space Agency, the European Space Agency, and NASA's Jet Propulsion Laboratory. The data will help scientists improve their understanding of the dynamics of ice in Greenland and in projecting how the Greenland Ice Sheet will respond to climate change in the decades and centuries to come.

This animation shows how ice is naturally transported from interior topographic divides to the coast via glaciers. The colors represent the speed of ice flow, with areas in red and purple flowing the fastest at rates of kilometers per year. The vectors indicate the direction of flow.

The topographic data used in the video are unpublished but courtesy of Ian Howat, The Ohio State University, Columbus, OH.