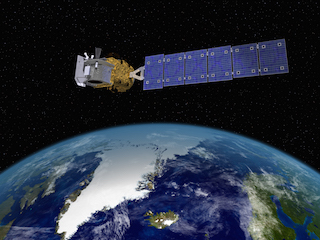 Willis recently joined a seven-member team on its aerial survey of Greenland’s coast, climbing aboard a NASA G-III plane that is mounted with a radar interferometry instrument called GLISTIN-A.

The team will make annual flights over the next five years to document changes in the island’s rapidly melting glaciers.

The first phase of OMG began in the summer of 2015 with a refitted fishing vessel that made sonar maps of the sea floor along Greenland’s coastline; that work will continue this year. In the fall, the NASA G-III plane will be used to drop some 250 expendable sensors that will measure the temperature and salinity of ocean water to a depth of 1,000 meters.

Also this year, another plane will make gravitational measurements along the coastline, the fourth phase of this multi-pronged investigation.

A major goal of OMG, reflected in its name, is to learn where in the complex, submerged terrain around Greenland, with its coastal fjords and its underwater canyons, that warming Atlantic waters are making contact with glacial toes. Researchers say this is helping to accelerate glacial melting and contributing to rising sea levels.

Willis, safely back at JPL after accompanying the aerial survey team on several legs of coastal mapping, fielded a few questions from the NASA Sea Level portal about the mission so far and the challenges ahead.

Portal: What is the main priority for the aerial mapping phase of OMG?

Willis: The idea is for this to be a baseline—to measure the heights of all the glaciers, then, when we go back, to see how it’s changed from one year to the next. We’ll be looking for thinning and retreat. Retreat is when they break off; thinning is when they speed up. Both are signs that they’re sort of under attack. There is already evidence of that for many large glaciers around Greenland, a handful that have been very highly studied—big glaciers. But our goal for OMG is to do something more comprehensive, and essentially, to try to look at all the glaciers at their endpoints. So we mapped a couple hundred glaciers, about three fourths of the ones we’re aiming for, the glacier faces. Glacier faces are where water interacts with ice.

Portal: What would you tell your scientific colleagues about the mission so far?

Willis: I think the mission is going extremely well. We’re collecting different pieces of this puzzle as we go along: measuring the sea floor, measuring ice, measuring oceans. Each one of those pieces is interesting in its own right. The measurements of (glacial) heights hopefully will be used by glaciologists to better construct how much ice is flowing off of these glaciers, and how the glacier is changing right at its edge, where it’s really changing fastest.

When we do the ocean campaign in September, we’ll be taking temperature and salinity measurements in many places where they have never been collected before. And we’re doing it in a comprehensive way, around the island. Sea floor data is also interesting to geologists. We hope at the end to put it all together and say something about how the ice sheet contributes to sea level rise today and eventually to the future, too.

Portal: You flew with the aerial mapping team for a portion of the trip?

Willis: I was just there for a few days, about five days, and they flew without me the rest of the trip. But it was a good few days because it helped the crew kind of understand the big picture of why we were doing it and what the science goals were. The more they understand what we’re doing, the more exciting it is for them, and the more invested they are. And that’s good for the project, and ultimately for the science return, too.

Portal: What did you tell them?

Willis: We talked about the big picture: why we’re doing it. I reminded people that Greenland had enough ice to raise sea levels by 20 feet globally. We know it’s melting, but we really don’t know how fast it’s going to happen or how much we’re in for. That’s what we’re trying to figure out. Also a little more detail about this part of the mission, too—how we’re looking for thinning of glaciers one year to the next. It’s a bit different kind of deployment for these guys. Normally, with this instrument, what you do is fly twice in pretty close succession and look at the differences between the two different flights, because things on the ground move a little bit. For that you have to repeat the same track very, very precisely. But for us, we actually don’t have that strong a requirement to repeat the track that precisely. We’re just looking at height changes from one year to the next. The changes are big enough. We’re not looking for these little tiny differences. In some ways it’s a little easier for the crew, and the folks operating the radar.

Portal: And this is just part of a massive project.

Willis: This is one cog in a big wheel, and we have the ocean part coming up this year. In 2016 we will have all four of our campaigns in the field. There’s the ship, which is going to measure the sea floor; another airplane that measures gravity, and also tells us about the sea floor shape; GLISTIN we just did; then the ocean part, the expendable CTDs (Conductivity, Temperature and Depth profilers). It’s a busy year for us.

Portal: How might this affect sea level modeling and projections?

Willis: One of the reasons I think we don’t have a good handle on how fast Greenland is going to lose ice is because we haven’t been observing it happening for very long. It’s kind of like weather; we got good at predicting weather because we got to see it happen over and over. Part of the idea behind OMG is, we’re going to watch the ice sheet melt, observing it over a period where it’s melting. It’s melting more in some places than others. The differences help give us a clue to how sensitive the ice sheet is to the ocean forcing.

Meet the People Behind the SWOT Water-Tracking Satellite
An ongoing sea level change project takes a look at the effects that river discharge has on sea level.

Going With the Flow: How Rivers Change Sea Level
The international Surface Water and Ocean Topography mission will provide high-definition data on the salt- and fresh water on Earth’s surface.

Tracking ‘Wiggles' Could Help Improve Glacier Models
A recent study uses data from the past to estimate sea level 30 years into the future.