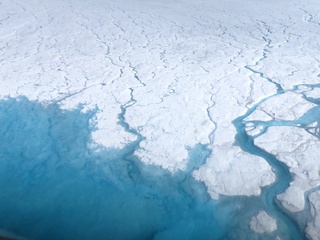 The answer: Nonseasonal variations in river discharge can have a significant effect on sea level near major river mouths.

A project by one group of researchers within the NASA Sea Level Change Team seeks to study these mechanisms, as reported in their paper earlier this year. Tony Lee, a co-author on the paper, says these processes involve a “halosteric effect,” where changes in the salinity, or “saltiness,” of seawater causes corresponding changes in sea level.

“River discharge brings in freshwater that dilutes the seawater, and fresher seawaters occupy more volume locally,” Lee said. “This effect increases the so-called halosteric height, which is one contributor to sea level change, in contrast to another contributor called thermosteric height that is related to thermal expansion of water.”

Extensive studies in the past show that seasonal river discharge can influence regional sea level significantly, Lee said. But the effect of discharge outside of this cycle, or nonseasonal discharge, around the global ocean has not been assessed systematically.

“From a sea level prediction perspective, we are more interested in the effect of nonseasonal discharge,” Lee said.

To study nonseasonal effects, Lee and his team conducted simulations using a global ocean computer model from the NASA-funded project “Estimating the Circulation and Climate of the Ocean” (ECCO). They ran two model simulations: control and sensitivity simulations.

“We found that nonseasonal discharge can affect sea level variations near major river mouths with a maximum impact up to 10 centimeters between low and high-discharge years,” Lee said. “These magnitudes are not small comparing to the average rate of global mean sea level rise [approximately 3.4 centimeters per decade].”

Previously, the team focused their sea level prediction efforts on the U.S. East and West coasts, only considering the effect of atmospheric forcings because the river discharge effect is much smaller in those regions.

“But when we look at the Gulf of Mexico, the same might not be true,” Lee said. “That is something that we are trying to assess: whether the inclusion of river discharge can improve seasonal prediction of sea level in the Gulf of Mexico.”