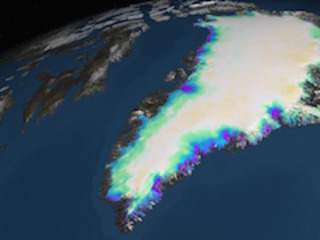 The view from above: mapping Greenland's melting glaciers

When did you first start doing sea level research?

That’s difficult to say because I started working with satellite altimetry when I was in graduate school, but I would say sea level in particular probably started around the launch of Topex, which was about ‘93.

What do you think are the primary open questions in your field that you would like to answer with your research?

How much is sea level going to go up in the future, what are the regional variations of that sea level rise, and what’s causing sea level to change.

Can you tell me a story or experience that brought the reality of sea level rise home to you?

I’ve spent 22 years looking at altimeter observations of sea level change, and over that (period) sea level has just basically continued to go steadily up.

Why is it important to provide sea level rise projections on a regional scale?

How do you use global satellite data to help making those regional projections?

Well, that’s where the research is so that’s a little hard to answer. Those are things we’re trying to figure out right now. But in general, you’re using observations of current sea level change to kind of calibrate various models you might have for sea level so you can then project them into the future.

Are there any other misconceptions people might have about sea level rise that you hope this website will help correct?

The idea that sea level rise is global, that there’s one number and it’s all going to be the same everywhere. The fact that there are regional variation and the amount of sea level rise that you’ll see at your location is going to vary depending on where you are. I think that’s an important message. I think it’s also important for people to see that we actually have observations—very good observations—of the ice sheets melting right now. We know what they’re contributing to sea level and so this is not something that’s in the distant future. Sea level rise is happening now and we have a lot of good NASA data that illustrates that.

One Year From Launch: US-European Satellite to Track World's Water
With a click, NASA's new SEA tool provides a snapshot of sea-level change for locations around the planet.