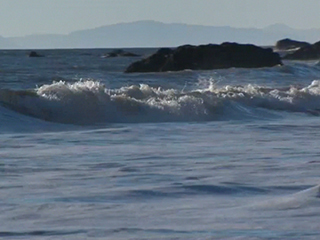 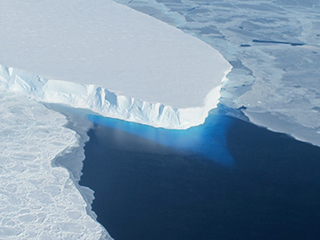 A new study by researchers at NASA and the University of California, Irvine, finds a rapidly melting section of the West Antarctic Ice Sheet appears to be in an irreversible state of decline, with nothing to stop the glaciers in this area from melting into the sea according to glaciologist and lead author Eric Rignot, of UC Irvine and NASA's Jet Propulsion Laboratory in Pasadena, California.

Three major lines of evidence point to the glaciers' eventual demise: the changes in their flow speeds, how much of each glacier floats on seawater, and the slope and depth of the terrain they are flowing over. In a paper in April, Rignot's research group discussed the steadily increasing flow speeds of these glaciers over the past 40 years. This new study examines the other two lines of evidence.

As glaciers flow out from land to the ocean, large expanses of ice behind their leading edges float on the seawater. The point on a glacier where it first loses contact with land is called the grounding line. Nearly all glacier melt occurs on the underside of the glacier beyond the grounding line, on the section floating on seawater. The Antarctic glaciers studied have thinned so much they are now floating above places where they used to sit solidly on land, which means their grounding lines are retreating inland.

The bedrock topography is another key to the fate of the ice in this basin. All the glacier beds slope deeper below sea level as they extend farther inland. As the glaciers retreat, they cannot escape the reach of the ocean, and the warm water will keep melting them even more rapidly.

The animation draws close to the Smith Glacier and shows how the grounding line of this glacier has moved inland 35 kilometers between 1996 and 2011. As the surface of the ice sheet is peeled away, showing the height and depth of the bedrock topography. Regions below sea level are shown in shades of brown while areas above sea level are shown in green. Sea level is shown in yellow.