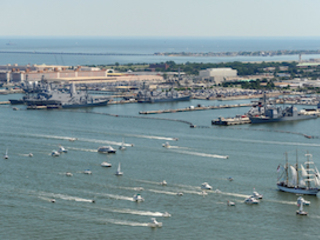 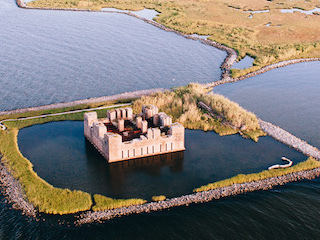 Around the Houston, Texas coast near NASA’s Johnson Space Center, reminders of Hurricane Ike are everywhere. You can pick up Hurricane Ike souvenir t-shirts, it’s the name of the kicking-est drink on the two-dollar taco Tuesday menu and the spiciest sauce at the barbeque joint down the road. And even though Ike occurred back in 2008, it remains etched on the collective memory of this area as the costliest tropical cyclone ever recorded to hit Texas.

Yet what would happen to these low lying areas if climate change causes more hurricanes to form or the ones that do form become more intense? Under Hurricane Ike there was a 12-foot storm surge. Now add that on top of an extra 8 or 17 inches of projected sea level rise over the next few years from climate change.

Sitting in Johnson Space Center’s Operations Office, I can see Galveston Bay out the window. But that’s typical. The geography of JSC is so flat you can pretty much see the Bay out of just about any south-facing window. I’d noticed Houston’s astounding flatness flying in the day before. There were lakes, ponds, and some flooded areas too as it had been raining recently. But not as much as a hill in sight.

"There's an environmental benefit to consolidation. We save on maintenance and energy."

I was talking with Joel Walker, JSC’s Director of Center Operations and Stacy Shutts, JSC’s sustainability program specialist, about how Walker’s office of strategic infrastructure has incorporated climate change into his organization’s daily thinking. See, JSC is like a city of 7000 people on 1,620 acres southeast of downtown Houston and it’s Walker who keeps the place running. His office is responsible for climate mitigation and adaptation. And anyone who has a project that will impact the environment in some way has to first address it with the environmental office, which then guides them in fulfilling the project within guidelines.

“Our lake goes into Galveston Bay, which goes into the Gulf of Mexico, so sea level rise comes up this way,” Walker gestured out the window as he explained how climate change considerations have been incorporated into the master plan for where and what buildings get built over the next 20-25 years.

In 2015, Executive Order 13693 established a set of environmental challenges and goals for all federal buildings and requires all U.S. Federal Agencies to create a Strategic Sustainability Performance Plan. Our sustainability goals include reducing greenhouse gas emissions, petroleum use, and energy consumption in buildings, acquiring energy efficient products, increasing renewable energy and evaluating climate change risks to identify and manage the effects of climate change on the agency’s operations and mission in both the short and long term. A team of Climate Adaptation Science Investigators (CASI) at NASA took this on.

Since NASA always loves a challenge, Walker and his team tried to follow all the required regulations, meet all the executive orders and then try to go beyond that. He ended up promoting a sustainability culture that permeates the entire organization.

"One way of thinking of stewardship or ethics is thinking it's for somebody else."

Another part of this initiative includes reducing the square footage footprint. “There’s an environmental benefit to consolidation,” he said. We save on maintenance and energy.” One new science building currently under construction is less than 90% of the square footage of the seven older buildings it will replace and will be LEED Silver.

Since JSC sits just 13 feet above sea level at its lowest part and 22 feet up at its highest, Walker and his team have to address sea level rise and climate change for all new building proposals on site. And although JSC hasn’t been flooded yet, they started demolition in the lowest lying area and the site where construction is happening now is 17 feet above sea level. Yes, that’s their “hill.”

“One way of thinking of stewardship or ethics,” said Shutts, “is thinking it’s for somebody else. If you’re thinking in a long term range for your business or organization, you have to plan for the next centuries cause we want to be around longer than that.” Of course we want JSC to be around for generations to come. It’s historic. It was established in 1961 as the Manned Spaceflight Center and Mission Control Center for the U.S. human space flight program.

Look, I packed an umbrella for a trip to Houston even though there might not be rain in the same way that Walker’s team gets prepared for the next big hurricane during hurricane season. Preparedness ranges from cleanup to checking tie-downs, to closing tunnel hatches, to Center closure, (that’s the moment where Dorothy comes out of hiding in the basement and runs up to the roof), and recovery. And remember, climate change could cause more intense hurricanes. Flooding would come from the tremendous amount of rain or from storm surge pushed ashore by the hurricane and sea level rise will add to the height of the storm surge.

Walker’s sustainability management approach also focuses on areas of energy and water reduction, green purchasing, reducing the generation of hazardous waste and increased diversion from landfilling of waste through recycling initiatives. Under his direction, the JSC constructed seven certified green buildings that use 100 percent green power and average 35-to 40-percent reductions in energy and water consumption of comparable facilities. With Walker’s leadership, JSC has reduced potable water use by 15 percent annually, or more than 60 million gallons per year since 2009, and over the past two years has composted more than 85,000 pounds of food waste.