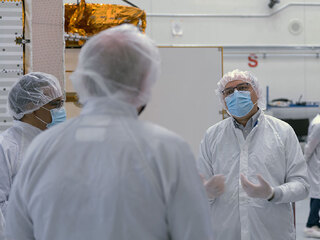 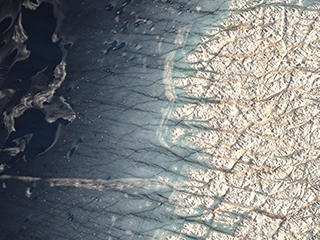 As sea level continues to rise in the years and decades ahead, coastal planners will rely on vital forecasts of where and when the risk of flooding is likely to be greatest.

Computer simulations are essential to scientists who make such forecasts and projections. These are mathematical models ­– portraits, in a sense – of how ice melts, how the ocean warms, and how coastlines change over time.

These models are like a series of snapshots – each frozen in time, but forecasting changes step-by-step as the years go by.

But a new approach to modeling seeks to turn those snapshots into something akin to a movie. Called the “Sea Level Projection System,” it combines measurement-based models of ice, ocean, and land changes over decades with advanced software that can project these changes into the future. The result: instead of a series of static steps, a dynamic simulation of sea-level change that presents a smoothly evolving progression – forecasting how changes might unfold in real time.

“Every time-step, every year, is super-high resolution,” said Eric Larour, an ice and sea-level researcher at NASA’s Jet Propulsion Laboratory in Southern California, and lead author of a recently published paper on the new modeling approach.

The new approach represents a big leap toward an often-elusive goal: combining, or “coupling” models that portray different kinds of changes in Earth’s ice and water. Some models reveal how ice melts, for example, while others might focus on heat-driven expansion of ocean water, or on the rising and falling of coastlines. The new modeling system can combine multiple models into one smoothly progressing simulation.

In practice, such models are often incompatible, using complex mathematical descriptions of physical phenomena, or averaging out subtle differences among regions of the globe.

Another troublesome issue involves estimating uncertainty. Critical to any projection of what might happen in the future are the boundaries scientists set, including the probability of the outcome and how much uncertainty should be attached to the conclusions.

“An estimate of sea-level rise doesn’t mean much without an uncertainty number associated with it,” said Nicole-Jeanne Schlegel, a sea-level researcher at JPL and a co-author of the paper. “You need the whole spectrum of what could happen, the probabilities around it. That is what this system provides.”

A key advantage of the new modeling approach is its treatment of sea-level fingerprints, a counter-intuitive effect of gravity combined with ice-melt. Sea levels near a large, melting body, like a glacier in Greenland, actually drop instead of rising as might be expected. This is due to the melting glacier losing mass, reducing its gravitational pull on nearby water, so the water migrates away.

At the same time, sea levels can rise on coastlines farther away – for instance, along the U.S. Eastern Seaboard – because of the ocean water added by the distant glacier. Scientists trace such patterns with increasing precision. In recent years, that includes matching the melt in specific sectors of Greenland or Antarctica to specific points on a distant coastline.

“We can now compute steady state gravitational fingerprints on the fly,” he said. “For every single one of the inputs we have upward of 200 model runs, at every resolution.”

It’s one example of a significant difference in the new modeling design – allowing a plug-and-play approach when more sophisticated models of ice melt, ocean expansion, or other physical processes emerge on the scientific scene.

These can be seamlessly integrated into the state-of-the-art modeling platform, called the Ice-sheet and Sea Level System Model, or ISSM, rather than requiring awkward recalculations each time a new model is brought onboard.

“All these different pieces of Earth that are contributing to sea level – so many of the systems are entwined and feed off each other,” Schlegel said. “And right now, that is not being considered. The real advantage (of the new approach) is to be able to run many models at the same time, all of them able to feed off each other so you don’t have this static idea of how sea-level responds.”

That means a living, breathing model that adapts as it goes – a potentially critical tool for coastal planners. They use information based on these projections of future sea-level rise to develop resilience, mitigation and adaptation approaches, such as infrastructure, from sea walls to drainage systems, that will protect coastal communities as seas grow higher and coastal flooding increases.

“We will want to really know the worst and best-case scenarios, which are then used by coastal planners for adaptation and mitigation,” Larour said.