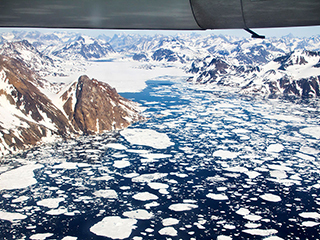 Greenland, Antarctica melting six times faster than in the 1990s 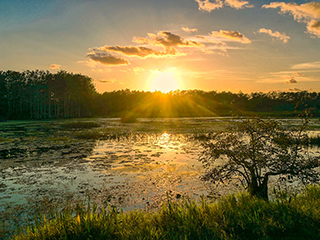 Satellites track dwindling ice and rising seas, and scientists comb through the data. Then they run computer models to sharpen the picture: These accelerating changes will transform planet Earth.

The variety of talks and presentations at the 2019 American Geophysical Union conference in San Francisco was dizzying, but many hit on the theme of a changing planet. For the NASA Sea Level Change Team, the focus was on increasingly robust data sets, more accurate modeling, and a fuller accounting of all the factors that contribute to sea level rise.

The team’s talks over the five-day conference can be grouped into a few broad categories: physical mechanisms, observed changes, and projections. Knowledge in all three of these spheres is growing deeper and more crisply detailed.

“The presentations at the Fall AGU meeting demonstrated the breadth of work being done by the team,” said team leader Ben Hamlington of NASA’s Jet Propulsion Laboratory in Pasadena, California. “We are focused on understanding the drivers of regional relative sea-level rise, which really requires the broad range of expertise that was on display.”

Under the “physical mechanisms” category we might place a talk by John Fasullo from the National Center for Atmospheric Research in Boulder, Colorado. The talk was based on recent work by Fasullo and Steve Nerem of the University of Colorado. They considered simulations of sea-level rise across geographic regions during the 28-year satellite record, the period during which satellites have been capable of measuring sea-surface height.

The simulations were run on sophisticated computer models, with and without the influence of humanity’s emissions of greenhouse gases and suspended particles, or aerosols. They found that the spatial patterns of sea-level rise during this period were largely driven by human emission of greenhouse gases and aerosols. They also showed that each type of emission is responsible for its own distinct pattern of change in sea level. And they found that such detectable patterns, especially for aerosols, probably predated the satellite era, likely causing a skew in interpretation of tide-gauge readings for at least half a century – including an overestimate of the mean rate of sea-level rise and an underestimate of its recent acceleration.

“Going forward through 2050, each of these agents will drive a distinct pattern of rise (depending on what your emissions eventually are) and thus will provide some degree of predictability to the regional character of sea level rise,” Fasullo wrote in an email.

“Observed changes” could include a talk by Carmen Boening of NASA’s Jet Propulsion Laboratory in Pasadena, California. She summarized her earlier findings that were something of a first for sea-level science. Using data from NASA’s GRACE satellites (Gravity Recovery and Climate Experiment), Boening showed that a temporary, 5-millimeter drop in global mean sea level in 2010-11 was caused by water storage on land – a La Niña-driven shift to greater rainfall over Australia, northern South America and Southeast Asia.

And for “projections,” we might turn to a presentation by Benjamin Strauss of Climate Central. He was introducing a new, publicly available online tool, partly funded by NASA, allowing users to generate maps of coastal flood vulnerability almost anywhere in the world. The map is based on an analysis presented in another AGU talk by Scott Kulp, a senior computational scientist at Climate Central. The map uses Google Earth as a platform, and can range across time-frames with varying assumptions. The map also can incorporate sea-level projections and flooding events. It is likely to be the first freely available, interactive map of its kind.

These are just a few examples of the 40 talks or poster sessions by members of the NASA Sea Level team. Please see the accompanying sidebar for the full list.

John Fasullo: “Drivers of the Altimeter Era Forced Response in Regional Sea Level and Consequences for the Coming Decades”

Manoochehr Shirzaei: “Unprecedented Crop Loss Due to 2019 Midwest US Flood Quantified from Space”

Surendra Adhikari: “Towards Explaining the Causes of GPS-derived Crustal Uplift Rates in Greenland”

Brett A. Buzzanga: “Towards a Cost-effective approach for Vertical Land Motion Mapping Integrating InSAR and GNSS: An Application in Hampton Roads, Virginia”

Em Blackwell: “Flood Hazards Along the Coast of California Due to Vertical Land Motion and Sea-level Rise” (poster session)

Johan Nilsson: “Ice-sheet-wide Comparison of Coincident Laser and Radar Observations from ICESat-2 and CryoSat-2 for Greenland and Antarctica”

Isabella Velicogna: “Continuity of Measurements of Time-variable Gravity Across the GRACE and GRACE-FO Missions over Greenland, Antarctica and the World’s Glaciers and Ice Caps.”

Enrico Ciraci: “Water Budget of the Indus River Basin between 2002 and 2015” (poster session)

Erik Ivins: “Toward a Baseline GIA Correction for Antarctica and Implications for East Antarctic Ice-mass Balance”