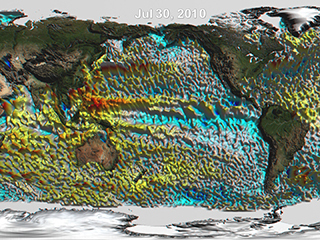 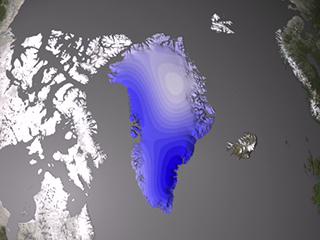 The mass changes of the Greenland Ice Sheet (GIS) are computed from the Gravity Recovery and Climate Experiment (GRACE) inter-satellite range-rate observations for the period April 5, 2003-July 25, 2009. The mass of the GIS has been computed at 10-day intervals and 200km spatial resolution from a regional high-resolution mascon solution (Luthcke and others, 2008 and 2006). The animation shows the change in mass referenced from April 5, 2003. The spatial variation in surface mass is shown in centimeters equivalent height of water. The time variation of the GIS mass is shown in the x-y plot insert with units of gigatons.