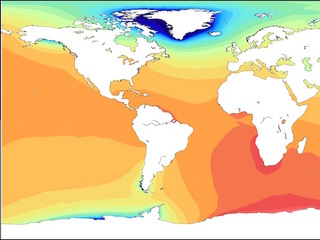 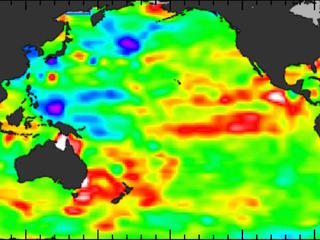 Sea level signals in turbulent coastal regions, such as the U.S. West Coast, are notoriously difficult to measure from space-based radar, due to the presence of land in the radar returns, sudden changes in the atmospheric water content due to storms, and rapidly changing tidal heights over shallow continental shelves. These and other atmospheric variations combine to throw off satellite readings.

“If you care about sea level, that is the part of the ocean people interact with,” said Ted Strub, an Oregon State University emeritus professor and a member of the NASA Sea Level Change Team. He specializes in using satellites to measure ocean circulation along the coast.

Strub and his OSU colleague, Craig Risien, combined satellite altimeter readings with data from tide gauges up and down the West Coast. Their technique produces a blended data set that provides a more reliable picture of near-shore currents and their north-south velocities than satellite readings alone.

The two scientists extended a technique that focused on the Oregon coast, published in 2008 by Strub, P. Michael Kosro and lead author Martin Saraceno, their colleague from Argentina. Their paper, “Blended sea level anomaly fields with enhanced coastal coverage along the U.S. West Coast,” was published online by the journal “Scientific Data” on March 1.

The new data set covers the entire U.S. West Coast, with improved sea level estimates extending from the coastline to 55 to 70 kilometers (34 to 43 miles) out. It runs from 1993, the beginning of the satellite altimeter period, to 2014. The previous study stopped at 2005.

Strub and Risien blended the tide gauge data with gridded, daily sea level anomaly fields, after subtracting a 20-year mean from both to “create a common reference height,” according to their paper, published March 1 in the journal, “Scientific Data.” The gridded altimeter data were provided by the French AVISO (Archiving, Validation and Interpretation of Satellite Oceanographic data) program.

“It’s a significant improvement of currents because we include the tide gauge data,” Risien said. “The tide gauges provide a more realistic estimate of the day-to-day coastal ocean variability in this data set.”

The scientists relied on current-meter data from NANOOS (Northwest Association of Networked Ocean Observing Systems) and other sources to check the accuracy of the new data set. This was especially gratifying for Risien; in his wide-ranging ocean research, he’d been directly involved with the NANOOS current meters.

“I was part of the mooring team that maintained the NH-10 mooring, which included recovery and deployment of the mooring as well as data management,” he said. “It was synergy, to be able to use those data we collected—to use them to vet this altimeter tide-gauge blended data set.”

The researchers say the new data set could be used to answer a variety of knotty questions. Among the first examples are separate studies they’ve already begun, examining how El Niño and a warm water anomaly off the coast might have affected currents in the coastal zone over the past two years.

That, in turn, could help biologists who are investigating changes in zooplankton species that accompanied these warm events.

“The difficulty is whether different species came from the north or the south, or offshore,” Strub said. “We can help them by showing what the currents were like, especially from the north or from the south.” He clarified this by explaining that the technique is better able to resolve north-south currents than east-west.

The data set also could help determine whether flat or falling sea levels along the West Coast in recent years are caused by yet another regional climate cycle, the Pacific Decadal Oscillation. Satellite sea-level maps so far have been unable to answer the question.

“The point is that all those maps are based on altimeter data that doesn’t reach the coast,” Strub said. “The question is, does that represent what is happening at the coast?”

Strub said he and Risien are looking at other coastal sites around the world that could be analyzed using their technique.

Their method requires a good tide gauge record, and so far, Risien said, one recent paper (Watson et al., 2015) shows that Australia looks like a possible candidate. But the two scientists also are trying to make further refinements.

“There are ways to improve what we’ve done,” Strub said. “One would be by adding a wind-driven component. Another would be to see if we can find a way to do this where there are not good tide gauge records.”

They also want to see how other scientists will put their data set to work.

“This data set can be used for a number of analyses,” Strub said. “There are many aspects during previous events that people are interested in exploring.”

To read the Risien/Strub paper: