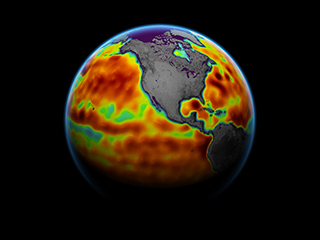 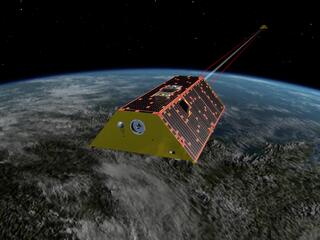 The rate at which plants and the land surface release moisture into the air has increased on a global scale between 2003 and 2019. These processes are collectively known as evapotranspiration, and a new NASA study has calculated its increase by using observations from gravity satellites.

By gauging the mass change of water between the oceans and the continents, the researchers determined that evapotranspiration’s rate of increase is up to two times higher than previous estimates. This is important because evapotranspiration represents a critical branch of the global water cycle – a cycle that creates the conditions for life on land.

While it is known that a warming climate should increase the rate of evapotranspiration, accurate global measurements have, until now, been elusive.

“Our study found that evapotranspiration has increased by about 10% since 2003, which is more than previously estimated, and is mostly due to warming temperatures,” said Madeleine Pascolini-Campbell, a postdoctoral researcher at NASA’s Jet Propulsion Laboratory in Southern California, who led the study. “We hope that this information about the water cycle will help to better inform the development and validation of climate models.”

But how does the rate of evapotranspiration affect the global water cycle? As moisture from the oceans circulates through the atmosphere, a portion falls as precipitation over the continents. Some of this water goes into rivers as runoff, and some seeps into soils. The remaining water evaporates from the land and transpires from plants back into the air.

Finding that evapotranspiration is increasing at a faster rate than previously known has implications for understanding how climate change could impact Earth in the future. As the world warms, evapotranspiration will accelerate, speeding up the drying of land and vegetation. Weather patterns can also be affected: Increased evaporation from land can create droughts in some regions. This is a symptom of a warming world that can have major consequences for ecosystems and human societies as stress on surface and groundwater supplies increases.

“Images of melting glaciers and shrinking ice sheets are a palpable way for us to understand the impacts of global warming,” said Pascolini-Campbell. “But dramatic changes are also happening to other key components of our planet’s water cycle that aren’t so visible, such as when water evaporates from the land before it can enter the rivers as runoff.”

The Gravity of Water

To get a global estimate of how evapotranspiration is changing, researchers found a new way to leverage data collected by the pair of Gravity Recovery and Climate Experiment (GRACE) satellites that operated from 2002 to 2017, and the successor pair, GRACE Follow-On, that launched in 2018. The GRACE mission was launched by NASA and the German Aerospace Center (DLR), and GRACE-FO is a partnership between NASA and German Research Centre for Geosciences (GFZ).

Because water has mass and therefore contributes to the Earth’s gravity signal, these spacecraft are exquisitely sensitive to the movement of water around the world, from tracking changes in ice sheets to water stored on land to variations in ocean mass. Seeing an opportunity, the researchers studied the 17-year dataset from GRACE and GRACE-FO to see if it was possible to tease out the gravitational signal associated with the movement of water by evapotranspiration.

“With the combined record of GRACE and GRACE-FO, we now have a long-enough observational record to be able to monitor these critical signs of global change,” said JT Reager, a JPL scientist and an investigator on the study. “When the gravity signal decreases, it means the land is losing water. Some of that loss is through rivers flowing back into the oceans, but the rest of it goes up into the atmosphere as evapotranspiration.”

By subtracting all the water mass outputs from the inputs over land and then calculating the residual mass of water, the researchers were able to estimate the rate of evapotranspiration. They did this by subtracting independent estimates of global river discharge (in other words, the rate of water flowing through rivers to the ocean) and GRACE and GRACE-FO satellite data (that reveal the local changes in water mass on and in the ground) from global precipitation measurements to find out the mass of water being lost to the atmosphere.

Due to observational and measurement challenges, global estimates of evapotranspiration are typically approximated using models or by taking measurements from individual locations and then scaling those measurements up. But these methods can be prone to error. By measuring global mass changes using gravity satellite observations, however, the researchers were able to get a more precise estimate for the rate of global evapotranspiration.

“For years, we’ve been looking for a way to measure gross changes in the global water cycle, and finally we’ve found it,” said Reager. “The magnitude of the evapotranspiration increases really surprised us: This is a sizable signal indicating our planet’s water cycle is changing.”

These results add to a growing body of research about our planet’s water cycle while also underlining the importance of continuity for Earth observations. Continuous satellite observations by satellites with a global view of water mass changes provide the long record necessary to observe the changing planet over the decades. These observations also help scientists track year-to-year variability in the water cycle caused by climate change and natural cycles.

The study, titled: “A 10% increase in global land evapotranspiration from 2003 to 2019,” was published May 26 in Nature. In addition to JPL, NASA’s Goddard Space Flight Center, in Greenbelt, Maryland, contributed to this research.